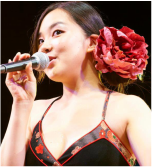 Ayumi Ueda ( Japan) -Vocal
Born and raised in Tokyo, Ayumi Ueda started singing with her father at the age of four. Influenced with myriad genres of music such as folk, country and ethnic music from all over the world, she decided to pursue music as a career after winning first prize at age fourteen on NHK-TV’s popular Japanese program, “Nodojiman Singer Competition”. In January 2007, she enrolled in Berklee College of Music, Boston, USA, with a scholarship from Berklee’s North American World Scholarship Tour.Her performances after entering Berklee have been numerous both on and off campus. She performed at the International Folk Festival 2008, representing Japan with Keiko Ueda (Composer/Pianist) and Geni Skendo (Flautist). She also received a huge response with her fusion of crystal singing bowls and traditional Japanese music. Later that year, she performed as a lead vocal at summer concert held at Carnegie Hall, New York.Ayumi graduated from the Berklee College of Music in May 2010 with a degree in Professional Music with courses emphasizing performance, world music research, and music therapy. She also won the college’s first Walter W. Harp Liberal Arts Music and Society Award. As a solo artist, leader of Women of the World, and a sound and Reiki Healer, Ayumi  has been working in both the USA and Japan as a multi talented spiritual artist.  https://linktr.ee/ayumiueda 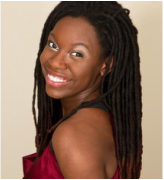 Deborah Pierre ( U.S/Haiti) -Vocal
Deborah Pierre is a vocalist and composer/arranger who seeks to push the boundaries of the perception of the human voice. Born of Haitian immigrants and raised in Boston, Massachusetts, she felt the power of music at a young age through her parent's musical and cultural experience, and sought for avenues to express that passion. She had the opportunity to attend the New England Conservatory prep school program, where she earn both a diploma in opera/musical theater studies, and a scholarship for further musical study. Deborah used this scholarship to pursue a broader horizon of music at Berklee College of Music in 2008, double majoring in Composition and Vocal Performance. She has since been awarded a full scholarship from the school to finish her degree. She has performed at such venues as Symphony Hall, Faneuil Hall, Jordan Hall, Berklee Performance Center, and the Agganis Arena. Deborah has  worked with many expert musicians, recently with Bobby McFerrin and Bill Whelan. She recently had the opportunity to sing for Annie Lennox, Willie Nelson, and Carole King. Taking influences from classical, jazz, and traditional Haitian music, Deborah’s unique sound blends into a tool with a world perspective, as she endeavors to learn and share the music of different cultures of the world. https://deboraymusic.com/home
​ 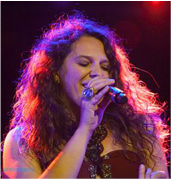 GIorgia Renosto (Italy)-Vocal
Born and raised in a musical family, Giorgia Renosto is an Italian vocalist who entered the artistic world at the young age of 15. Her ability to focus on various types of vocal styles inside the extremely diverse world of Vocal Jazz allowed her to capture elements of vocal technique from different sources of inspiration and at 17, she was selected as one of the winners of the "Giovani Proposte" of the Italian contest "Sanremo Giovani".While pursuing her Bachelor's degree in History of Art, her passion for music was very much alive, touring Europe with the award-winning acappella group L'Una e Cinque, as well as the Free Style Orchestra, the Jazz Big Band directed by Maestro Diego Borotti, and the White Gospel Group. Giorgia was twice awarded as a recipient of the World Scholarship Tour from Berklee College of Music and recently graduated Summa Cum Laude from the prestigious institution with a degree in Performance. Giorgia has also performed in musical theater, both in Europe and the United States. Musical theater roles include La Monaca di Monza and Lucia (I Promessi Sposi), Signora Naccarelli (The Light in The Piazza), Rosabella (The Most Happy Fella). She is currently working on her own children's music project called "Violetta," aiming to educate children through music. 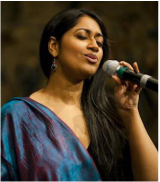 Annette Philip (India) - Vocal
Annette Philip is an Indian vocalist, composer/arranger, recording artist and choir conductor who thrives on experimenting with the human voice. In 2003, she co-founded Artistes Unlimited (AU) in New Delhi, India, a performing arts ensemble, promoting collaboration among musicians in the city. Annette began working in the professional media circuit in New Delhi at the age of seventeen. She has since become an established recording artist, lending her voice to albums, jingles and voice-overs in nine languages, for television and radio. She also finds inspiration in musical theatre; performing, writing, and recording for various productions in India.  In 2010, Annette was inducted as a faculty member of the Voice Department at Berklee College of Music, as well as an ensemble director for Berklee’s Education outreach City Music Program. She also founded Berklee's first ever Indian Ensemble, one of the college's largest and most diverse ensembles with over 50 members currently.
She has been privileged to share the stage with artists such as A.R.Rahman, Angelique Kidjo, Buster Williams, Victor Lewis, Jack DeJohnette, Shubha Mudgal, Dr. Ysaye M. Barnwell, Fritz Renold, Barrie Lee Hall, Mark Gross, Adam Nussbaum, Philip Bailey, Walter Beasley, Lawrence Watson, Joey Blake, Yoron Israel, and John Lockwood, amongst others.   http://www.annettephilip.com/ 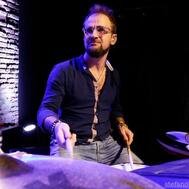 GIANCARLO “GC” DE TRIZIO(Italy)– Drums , Percussion
Giancarlo “GC” de Trizio is an award-winning drummer well known for his energetic live performances and great studio skills.
Originally from the city of Molfetta in the South of Italy, Giancarlo started playing piano at the age of 9 and drums when he was 12.
​When asked why he chose the drums he says “I get the best feeling in the world when people start moving theirhead or dancing to my groove. That means you’ve reached them at a level they are not even aware of”.
He received a Degree in Classical Percussion from the Conservatory of Bari (Italy) and a Bachelor’s in Performance
from The Berklee College of Music in Boston.
He has toured extensively the US, Canada and Europe with Bruce Springsteen’s saxophone player Jake Clemons,
Tunisian Artist Emel Mathlouthi and Broadway Shows “In The Heights” and “The Book of Mormon”.
Some of his other collaborations include: Sting, Angelique Kidjo, Miesa, Billy Porter, Jason Alexander (from
Seinfeld), Korean pop stars Sohyang, Kim Dong-Wook, Hwang Chi Yeol, film composer Alan Silvestri, Oscar Winners
Pasek & Paul, Mykal Kilgore and more...
Festivals include: Blue Note Jazz Festival, Newport Jazz Festival, Beantown Jazz Festival, NYC Summer Stage, Desert Daze, Nuits d’Afrique.
He currently performs on Broadway for musicals such as: “Hamilton”, “The Lion King” and “Dear Evan Hansen”.
GC has taught masterclasses at Musicians Institute (Los Angeles), Berklee College of Music (Boston), University of
South and Central Florida.
In 2016, he was a judge for the biggest drum competition in the world: Guitar Center’s Drum-Off.
He regularly performs with dancers from the Alvin Ailey School and Parsons Dance Company.
He is also a Voting Member of the Recording Academy which awards the GRAMMYs every year.
Giancarlo endorses Pearl drums, Zildjian cymbals, Vic Firth sticks, Remo heads and Humes & Berg cases.
Whether in concert, theatre show or dance performance, GC is the rhythmic driving force behind every project he
is part of and is very excited to join Women of The World on their Japan 2020 tour.