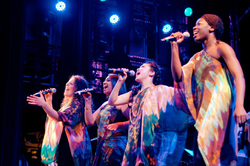 Women of the World was formed to bring women musicians from across the globe onto a common platform to collaborate and create through the sharing of music, to explore and celebrate the differences in ideologies and cultural tenets that exist in the daily lives of women all over the world.

Ayumi Ueda, a Berklee College of Music alumna from Japan, sought to create a multicultural ensemble that not only crossed boundaries musically, but one that was also committed to the daily practice of peace in their daily interactions. Ayumi joined forces with like-minded vocal artists, Giorgia Renosto from Italy, Annette Philip from India, and Debo Ray from USA/Haiti to manifest this vision.

The Women of the World repertoire is thus, vast and varied. Constantly searching for new genres to explore, the group has performed in 37 languages (and counting) including Bulgarian, Cuban, Ladino, Brazilian, Turkish, Kenyan, Haitian, Indian, Italian and Japanese music.

In many ways, the ensemble is a microcosm of the world. Each of the musicians has a strong artistic identity shaped by the culture in which they grew up, and each finds endless excitement in learning and exploring the many cultures of the world. The unique music which stems forth from this cross-pollination of genres, rhythms and global sounds is thus borderless and spirited, carrying the undeniable message of unity.

Through their work, Women of the World created a stir in the community, receiving support from renowned artists such as Grammy-award winning maestro, Bobby McFerrin. They went on to share the stage with African vocal icon, Angelique Kidjo, LaBelle powerhouse, Nona Hendryx, as well as the Boston Pops Orchestra led by conductor Keith Lockhart.

Women of the World continues to serve as cultural ambassadors of peace and unity through music and has delighted audiences at venues like Carnegie Hall, Blue Note Jazz Club, Boston Symphony Hall, the Kennedy Center, The Apollo Theater as well as through collaborations with the United Nations, amongst others. They have released 3 albums: Koloro (2012), Makana (2016) Live (2017)

Channeling the power of collective action, Women of the World has brought together over 200 women from all over the globe believing in their music, in their bond as a family of artists, and in peace.